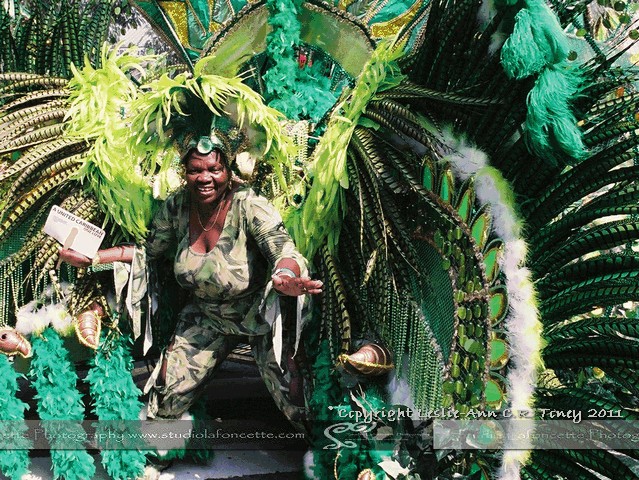 This weekend a massive explosion of color will take over the streets of Toronto, Canada for their annual Caribana festival. Caribana, like so many other Caribbean festivals was started by Caribbean (West Indian*) immigrants and patterned after the explosion that is Trinidad and Tobago carnival. Interesting to note is that although Caribana started as the Caribbean contribution to Canada’s centennial celebrations of 1967, it is purposely held on the weekend closeset to the commemoration of emancipation in many West Indian* islands.

One person I’m almost sure will be present is veteran carnival queen, Lenore Caterson. I interviewed her in February of 2010 and here’s some background on her history of being a Mas Woman. Check out the other links for more info  https://studiolafoncettephotography.wordpress.com/2011/02/18/lenore-caterson-international-mas-woman-bdc-1136/.

*Although I prefer and usually identify myself as Caribbean, I use the term West Indian here to indicate nations that were previously colonized by the British and still share language and some social, culinary and governmental customs. It also includes Guyana, which is not in the Caribbean.

Additionally, in the British colonies the enslaved were emmancipated as of August 1834. The British sought to exact another 6 years of “apprenticeship” from the now “free” Africans. This failed as in many islands, particularly the crown colonies (Jamaica, Trinidad, Barbados, Guyana) they had other options than to return to the plantations. This failure caused full emmancipation to be declared in 1838. This August 1, 1834 date, which is observed as an official public holiday, is observed in all the former British “West Indian” colonies today.